What the digital world would be like with Apple’s App Transparency Tracking framework in iOS 14?12 min read

In our previous article, we went into considerable detail on what Apple’s App Transparency Tracking (ATT) framework entails.

Now, let’s focus on how this is likely to impact digital advertising and what advertisers need to do for a proper transition.

What does the ATT update mean for Advertisers?

In Apple’s previous push towards user privacy, they had introduced a similar prompt in iOS 13 asking for consent to share location information. Opt-in rates to allow location-sharing with apps when they’re in the background plummeted from 100% to below 50%.

Facebook expects similar outcomes in the latest scenario. “In testing, we’ve seen more than a 50% drop in Audience Network publisher revenue;” and, “Our studies show, without personalized ads powered by their own data, small businesses could see a cut of over 60% of website sales from ads.”

If users opt out of tracking, this will reduce opportunities for advertisers to serve them targeted ads, and may have a dramatic impact on performance.

Most platforms (including but not limited to Google, Facebook, Twitter, most DSPs, MMPs like Adjust, Appsflyer, etc.) will use SKAdNetwork for connecting to platforms using it via S2S integrations, while Apple Search Ads will have its framework.

The SKAdNetwork appends attribution parameters upon the ad click. When the app is installed and opened for the first time, it will send an install post-back to the ad network or MMP, including the campaign ID and other related information.

As a result, ad networks like Google and Facebook will have significantly less insight into the apps that get installed via ads. Consequently, so will app developers and marketers.

What Percentage of Mobile Users Globally and in India use iOS?

India’s percentage is lower but is still sizable in absolute terms, and is especially attractive in terms of customer value for advertisers.

Advertisers will be impacted primarily with respect to:

Is this going to affect only in-app advertising or mobile web too?

IDFA and its Android counterpart AAID are device identifiers used in mobile apps only. If a user accesses the web via a mobile browser on their Apple device and does not interact with any in-app environment in the session, the advertising they see will still be governed by existing cookie-based identification.

What are the likely responses to mitigate these issues?

Targeting focus will shift from behavioural to contextual

In the short and medium-term, ad targeting is likely to move to be contextual rather than behavioural, as is the current norm. Privacy norm compliant contextual signals like time of the day, device model publisher, content, general location (city, country), etc. will allow advertisers to target users.

Since precise audience attributes in targeting won’t have the same impact in the new system, it will help if mixed audience sets are run, which would help reduce CPMs and CPCs. The disadvantage, of course, will be less control over the audiences.

Conversions API or Server-to-Server integration are going to become the topmost priority for all the advertisers.

Since iOS will limit data collection from all the apps, using a server-to-server integration as a method to parse data from the backend to the ad platforms (Facebook, Google, etc.) will allow for campaigns to be optimized on them and keep the performance stable, and even improve.

Read more about S2S integrations, their benefits, and how they can be implemented here.

Facebook has released its Conversions API update, making it easier for advertisers and their partners to integrate. While the same system would not work for Google, a custom S2S integration will go a long way in keeping things in control.

Measurement will be based on probabilistic models

With no IDFA based deterministic data, and with only one post-back per user per app, many measurement goals including and beyond installs will need to be worked upon in novel ways. Ad Networks and MMPs are working on probabilistic models that consider previous funnel-based performance metrics to create predictive decision trees to measure, attribute and optimize.

What Are The Next Steps for Advertisers?

First-party data is your holy grail. Start working towards building robust first-party data-derived identity graphs of your users. Invest in the right sources, DMPs, data aggregation pipes etc. if needed for the same.

Due to unavailability of a lot of third party data and user level attributes, FB would no longer be as efficient as it currently is. We may need to go back to the times when manual optimising was way more powerful. So building contextual audiences, testing and scaling up will again become an important part.

We may see industry moving back to well researched narrow audience targeting. Passing S2S events around transaction, acquisition & revenue and then optimising manually by testing a combination of audience, creative and objective may become the industry norm.

As much as Facebook has been vocal in criticizing Apple’s move, it also has taken the stance to comply with the policies. At the same time, it has warned advertisers of up to 50% revenue loss.

It has also published in-depth articles on the expected impact of Apple’s announcements, what Facebook is doing, and what action advertisers need to take. Marketing teams leveraging Facebook’s platform for ads need to understand and adjust their plans in light of these restrictions.

The biggest impact for Facebook advertisers will be limited targeting options and tracking. However, an activity/campaign (including user actions) that resides entirely on Facebook platforms (like e-commerce on Facebook with payment checkouts included) will continue to benefit from Facebook’s deterministic data.

Also of note is that Advertisers will now only be able to use a maximum of 8 events for campaign optimizations (including the standard events). Page view events, link clicks and landing page view optimizations aren’t included in the 8 event limit.

This is going to translate into more and more server-to-server integrations (conversion APIs), helping advertisers pass events directly to Facebook. With the enhancements by Facebook to the Conversions API, the plug-and-play setup is now supported by various e-commerce platforms. For example, the systems using Shopify will require only 15 minutes to set up the conversions API and hit the ground running.

To track activity from iOS users after the ATT prompt, Facebook will introduce Aggregated Event Measurement. We recommend all advertisers verify their domain(s) to ensure they have the authority to configure conversion events tracked on their domains.

It’s required by Facebook that businesses verify their domain if the domain has pixels owned by multiple businesses or personal ad accounts. If these domains are not verified, the advertiser cannot edit the domain’s conversion event configuration.

The process can take up to 3 months. Thereby advertisers must jump into it on day 1 itself.

As mentioned earlier, while conversions API does take care of a lot of things for FB ad accounts, the same solution won’t work for Google. For Google, custom integration is required and can help in passing all the required events to google.

Google too is complying with Apple’s ATT norms.

If your app uses Google’s SDKs for advertising, in addition to the above, Google recommends that you update Mobile Ads SDK to version 7.64 to support SkAdNetwork.

Your advertising partner(s) can support you by helping implement custom S2S integrations to pass the required parameters from the backend.

Also, Google has stated that:

“Advertisers running Display, Video and other campaigns promoting web-based conversion goals may see performance fluctuations as Apple’s ATT policies go into effect. During this time, we will be expanding modelled conversions to more iOS 14 traffic.”

Here, modelled conversions mean that instead of reporting the numbers directly (as those could well be incorrect), they will share estimates. Please keep this in mind when designing, executing, and measuring your campaigns.

How are MMPs handling this?

All of them are expected to move to SKAd Network. Check with your MMP for details.

Mobile Measurement Partners (MMPs like AppsFlyer, branch.io) built their measurement and fraud capabilities around the IDFA identifier. While Apple has announced a replacement API (SKAdNetwork) that will allow for conversion data to be passed back at the campaign level, we’re still going to see a reduction in the fidelity of data that MMPs use to identify fraud and performance across mobile campaigns.

Our Easyinsights team will be performing custom S2S integrations with MMPs and publisher platforms alike to handle the challenges going forward. Do reach out to your Easyinsights/ETMedia labs representative for details.

These are testing times. At ETMedia labs, we have set up a high-performance team that has the mandate of staying up-to-date with all changes, technical and otherwise. The team is working on numerous scenarios, strategies, and advising our clients on how best to navigate these waters.

If you want to discuss how these changes can affect your business, reach out to us here. 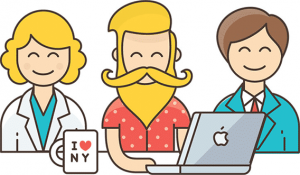